The Harvey Wallbanger appears in literature as early as 1971. The cocktail is reported to have been invented in 1952 by three-time world champion mixologist Donato “Duke” Antone (Paolantonio) but didn’t become popular until the late 60’s.  The Harvey Wallbanger’s popularity is largely a result of the promotional efforts of George Bednar, a former football player and Galliano sales manager based in California. The drink supposed to have been named after a Manhattan Beach surfer who was a regular patron of Duke’s Blackwatch Bar on Sunset Boulevard in Hollywood during the early 1950s.

The Harvey Wallbanger has a memorable name in cocktail history and one of the worst reputations.  A mix of vodka, orange juice and Galliano, it was one of the preeminent drinks of the 1970s, a decade recognized by drink historians as the Dark Ages of the cocktail. A time of sloppy, foolish drinks made with sour mix and other shortcuts to flavor, given  names like Mudslide and Screw driver.

In 2012, Galliano had gone back to it’s original recipe which is higher in alcohol content and more flavorful for crafting great cocktails. 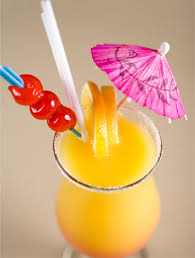 Pour Vodka and Orange juice in tall glass with ice and stir.  Float the Galliano on top.

Some of our favorite websites!

"In the nineteenth century, temperance notwithstanding, the proud bartender was considered on par with a fine chef, a creative professional of impressive caliber." - Ted Haigh
Follow Daddy-O's Martinis on WordPress.com

"Learn to savor the spirits of rum, gin, brandy, whiskey and the entire spectrum of deeply flavored drink constituents. Vodka cocktails will never teach you anything." - Ted Haigh