Sloppy Joe’s Bar was the premium bar to visit when tourists got to Havana.  The owner Jose “sloppy” Abel had come to Cuba in 1904 from Spain, and worked as a barman at several restaurants and bars.  In 1918 he decided to open up his own place.  He purchased an old grocery store on the corner of Obispo and Zulueta streets and converted it to a bar.  While serving several American friends at his establishment they noticed the poor appearance and untidiness of the place, thus the name ‘Sloppy’ Joe’s stuck.

Sloppy Joe’s became internationally famous and was in a league all its own.  Many tourists arriving from abroad would go straight from the ship in Havana harbor to Sloppy Joe’s bar, spend a few hours there, and then go back to the boat.  That’s all of Havana they’d see!

The bar had opened just as America entered prohibition, and ninety percent of its clients were Americans escaping to where drinking could carry on freely.  There were two slogans for the bar: during prohibition, “First port of call, out where the ‘wet’ begins,” after prohibition, “Where the great of the world and the not-so-great meet daily.”  Sloppy Joe’s had served its clients for four decades by the time it closed, and during that time many notable individuals visited such as Frank Sinatra and Ernest Hemingway.  It made its big screen debut in the 1959 film Our Man in Havana.  The movie was released a few months after the Cuban revolution had taken place.

After the revolution, ninety percent of its business fell off since most of its clientele where American.  A fire in the 1960’s closed the place.  Since then, the bar has been restored and re-opened in 2013.  It is fully operational, and will once again serve many tourists since the lifting of the U.S. embargo.  The bar still makes its famous drinks such as the Sloppy Joe’s, Daiquiris, and many more.  Next time you’re in Havana, make it point to stop by Sloppy Joe’s.  Also, check out the classic film Our Man in Havana (see the official film trailer below.)

Ernest Hemingway speaks to Noel Coward and Alec Guinness on the set of Our Man in Havana, summer of 1958. The film was released in 1959. 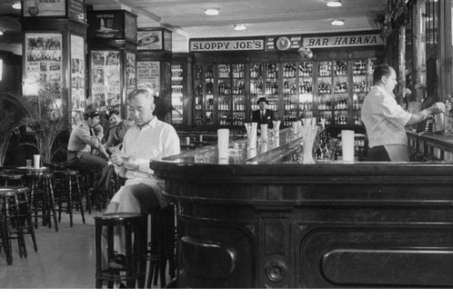 Alec Guinness at Sloppy Joe’s Bar during the filming of Our Man in Havana, summer of 1958. The film was released in 1959. 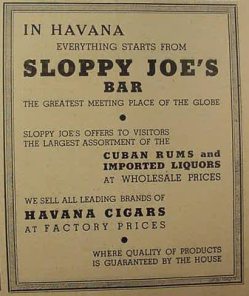 Some of our favorite websites!

"In the nineteenth century, temperance notwithstanding, the proud bartender was considered on par with a fine chef, a creative professional of impressive caliber." - Ted Haigh
Follow Daddy-O's Martinis on WordPress.com

"Learn to savor the spirits of rum, gin, brandy, whiskey and the entire spectrum of deeply flavored drink constituents. Vodka cocktails will never teach you anything." - Ted Haigh